If we would have dreamt the event, it wouldn ...

If we would have dreamt the event, it wouldn’t have been as good as what we just witnessed! The conditions, organizations, riders, everything made it epic!

First days were some of the most insane conditions ever witness in a contest; double mast sets,epic riding made it the best showcase for windsurfing! Going on the rocks was as likely as getting pounded by huge sets. If you made it out the wave selection was critical and the best showed how it was done! It was really exciting to see all Goya riders do great in all categories.

Bernd (1st) was sailing as he was free-sailing; connecting waves, hitting all the sections and going off with takas and goiters! He really fought and had to beat Kevin 2 times to claim it . Being just 16, we see a great future for Bernd as this is an impressive milestone for his career.

Brawzinho’s (3d) power and style really made an impression on the crowd and judges.He got a nice 3d place . He had amazing goiters and takas but the light conditions favored a Bernd in great form.

Levi was impressive on the first days sailing at his best with late hits, power carving…At this point most expected him to be in the top 3. Unfortunately he couldn’t confirm and had a result that doesn’t reflect his true sailing style and abilities…

Josh  made a show the first day,hitting the heaviest section with style. Highlight will be when he went to the rocks,destroyed everything, grabbed Francisco’s kit and sailed out with couple minute left, took a massive set wave and did one of the best hit of the contest and made the crowd cheer!

Francisco was printing every wave he took with his style, flowing up in the ladder he got stopped by Polakow and Lenny. Tight heat there but the judge favored a better wave selection and incredible sailing from these two guys.

Laurent climbed 3 heats on the double with a great heat sticking a goiter and a 360.

Junko (1st) was impressive, hitting sections, going vertical all wrapped up with speed and great timing! She really is a amazing sailor and makes all of us very proud.

Tom Juban (1st) (Camille’s brother), was on fire in the youth category, he made his way to the top in fromt of Harley Stone (3d) that was also displaying great skills and style!

Paul (4th) Karaolides from Cyprus is a new addition to our amateur team and he is sailing great and pushes his limits everytime a bit more! Excited to see him on the podium next year! 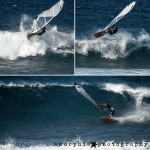