The 115, 125 and 135 now come as Foil Ready constructions allowing the use of a hyrdofoil. The Bolt line focusses on increased widths that will primarily add to your average speed around the course while still focusing on top end performance with tail cut-outs and the infinite tail rocker acceleration our Bolts are known and praised for.

The Bolt is Francisco’s favorite approach on racing. Crazy fast but still accessible and easy, with a rocker that has an almost continuos flat section from behind the mast to the tail, with only the lightest release off the tail for pure speed and acceleration.

A concave deck drives the power of the rig lower and forward on the water. Generous tail cutouts bring flotation to lower speeds and reduce the wetted area on straight lines. The Bolt gets up and planing on the lightest breeze, and paces through gusts, allowing you to forcefully ride on the fin with direct control. The new outlines project you out of jibes like no other Freerace board. 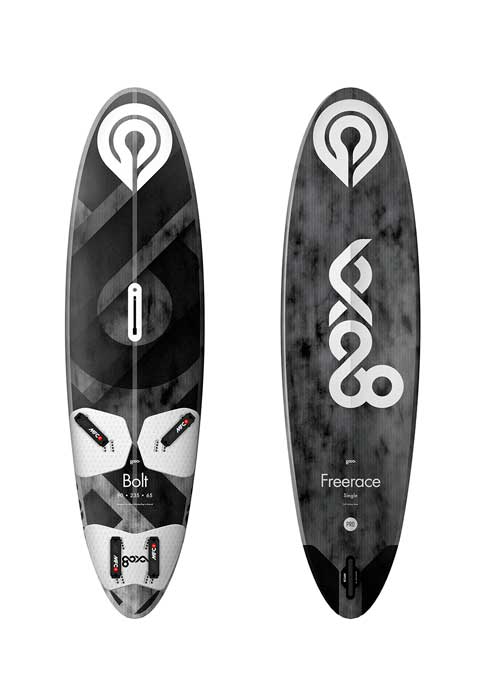 Direct Drive Monocoque. The Direct Drive Monocoque connects your stance to the masttrack, supplying your board with the optimal ratio of stiffness to flex and distributing peak loads to the rest of the board. Additionally a triangular glass patch acts as a backbone to the core of your Freecarve, Freeride and Freerace board, making it stiff and eliminating primary distortions. It furthermore readies your board* to carry a hyrofoil. (* Bolt 115, 125, 135).

Full Carbon Deck. Biaxial Carbon is the perfect reinforcement for adding global torsional stiffness across the board. To add as much of it as possible while retaining a certain amount of desirable forgiving flex in our Freecarve, Freeride and Freerace boards we are covering the entire deck in it. 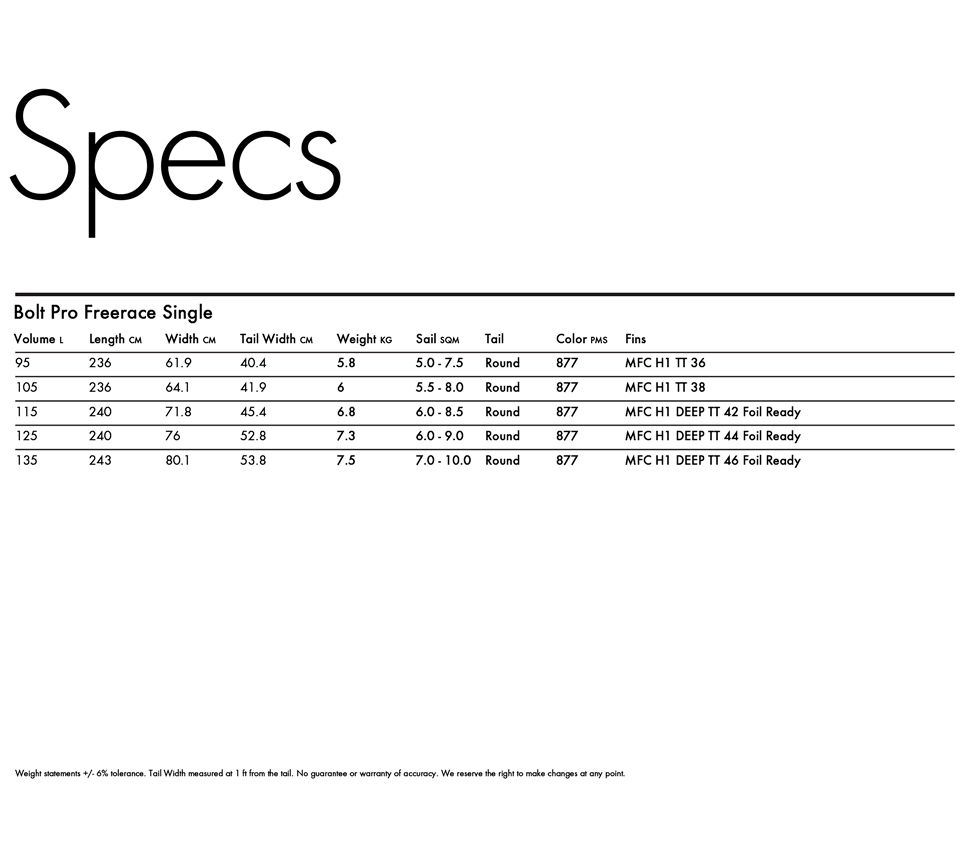 Wow. Just Wow. What an amazing board.

I rented it for three ~20+ mph days at OBX. The Bolt 105 was instant fun. I put a 5.4m2 E-Type on it and was blasting out for miles away from shore immediately. Once I had the rental sail dialed in, I was the fastest person on the water. I was completing my jibes on the first tack. Before the end of the first day, I was planing away out of my duck jibes. The board was so easy to sail, yet it was super fast and maneuverable. With the 5.4 fully powered up, the board was very stable. I didn't have to pay attention at all. I had a well-chosen weed fin from my stash that paired well with the board. I have been sailing performance gear for decades. This is by far the most fun I have had on a mid-sized board. Amazing. It made the week. Oh, and landing high-speed skipping jumps (not going high) off the swell was a breeze. The tail never went out on me.

I sail with a lot of back foot pressure. This seemed to work well on the Bolt. The fin I was given was good, but I found the board did better with one of my own fins (Tangent Dynamics). They were similar in length/depth, but mine had less area and the leading edge was more vertical. When the board would spin out on me, my fin seemed to help the board catch back on track more naturally. The rental fin didn't do this for me.

(I also tried a Proton 116. I liked it as well, but for different reasons. In comparing the two, though, the Proton took a much more active approach to sailing. I had to pay more attention to my jibes -- setting the edge took more focus but rewarded with a very powerful turn. Once the Proton was on a plane, it was definitely faster than anything I've ever sailed in those types of conditions with a sail like the 7.3m2 S-Type. For a weekend warrior that likes to go fast, though, I would choose a Bolt over the Proton every time. The Proton didn't behave as well when not planing, for instance.)

I wish I could have tried the 95 and 115! And I really need to try this board on freshwater as that is where I will be doing most of my sailing for the time being.

I sailed the 2018 Bolt 115 and 125 at the Dunkerbeck ProCenter in Bonaire this past week and absolutely loved it! I've never had a board that was this easy and fast to get to plane – especially the 125l. To my opinion, it is a lot faster and more fun to sail than the SB Futura. I am sold and stoke! Cudos also for the Proton 136: even sailing in slightly higher wind than intended with only a Mark 7.2, this board was flying and remained easy to control and still great to jybe. Loved it! While the Mark are great sails, please design 2-camber freerace sail range! That would be an absolutely awesome combo with the Bolt collection.

Bought the 2018 135L for slalom and to start foiling. As a slalom board it sails as advertised. But as a foil board it has been amazing. I was thinking 115L but the Goya team advised me to go big, and that was the right choice. It allows me to more easily rig for the gusts. I've only had 14 days foiling so far, but can attest that the board is super fun to sail, crashes very softly, and holds up quite well to the abuses of foiling.

Today was pretty windy so I was on my 4,7 and 90ltr FSW. But the wind dropped significantly in the evening so I put the Bolt together with 4,7 and 38cm original fin which seemed to be horrible combination of gear but never mind. And I was impressed.
Very quick to plane. Easier than with Volar. If the Volar is freeride board on steroids then Bolt is Volar on steroids. Very nice jibing even with such a long fin. Very nice and soft riding through the chop. Very easy to keep nose down, but very easy to make some chop hops. Bord is much livelier than Volar and with higher top speed and and going upwind very easily. I could close and sheet in even on my 4,7 wave sail going upwind without significant loose of speed.
It is unbelievable how the board planes through the luls.
It was only 30min ride on underpowered 4,7 but this board is relly dream.

Thank you for your help

We use cookies to provide you with the best possible experience. You accept this by continuing to use our website.Accept